The official Apple specs say that the 2.0Ghz Macbook can take up to 2 GB of memory. There’s a bit of information on the web–like this forum posting, for example–that says you can go up to 3 GB. The system board can address slightly more than 3 GB, so the 2 GB limit is reportedly lower than what the hardware is capable of. By chance, I noticed a 2 GB chip for a reasonable $40 on my local craigslist, so I decided to see for myself whether the stories were true.

It seems they are! I’ve been running the computer for a little over a week now with two chips: a 1 GB module, which had been in there before, and the new 2 GB module. It’s been put through its paces: on a given work day, I run Eclipse, Firefox, Thunderbird, Colloquy (an irc client), Adium (instant messaging client), Skype (a VoIP client), a java application server in development mode, a mysql server, and emacs, all at once.

The swap size has still been high, typically around ~500 MB, but there are no longer the delays that I used to experience with 2 GB of memory when I had a lot of apps open and switched between them. So far, there have been no problems with stability.

Here’s a screenshot from System Profiler: 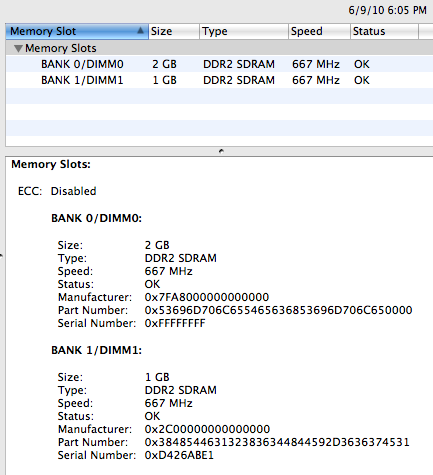 Note that Apple released two different models with the 2.0 Ghz Core 2 Duo processor. You can find your machine’s model in System Profiler on the Hardware Overview screen. The 2 GB official limit applies to “Macbook2,1.” The later version, “Macbook3,1” can take up to 4 GB.

With the additional memory, this machine will hopefully last me another two years.